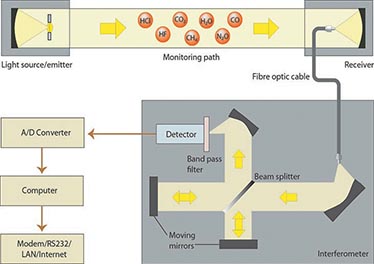 OPSIS has developed an analyser for monitoring compounds specifically in the infra-red wavelength range area. The OPSIS IR technique is based on the same method for identifying and measuring concentrations of various compounds as the comprehensive OPSIS spectrometer technique.

The IR technique is based on Beer-Lambert’s absoption law, which states the relationship between the quantity of light absorbed and the number of molecules in the light path. A light source projects a light beam onto a receiver which transfers the light via an optical fibre to the analyser.

The analyser includes an interferometer, a computer and control circuit cards. The interferometer consists of a beam splitter which divides the light towards two moving mirrors. An interference pattern is formed.

By using advanced computer calculations, the interference pattern is transformed into a wavelength spectrum, corresponding to the spectrum which is measured in the OPSIS spectrometer.

The interferometer gives higher spectral resolution in the infra-red wavelength range than the spectrometer does.

The computer proceeds by varying the size factors for each reference spectrum until it reaches the best possible match. From this the different gas concentrations can be calculated with high accuracy. 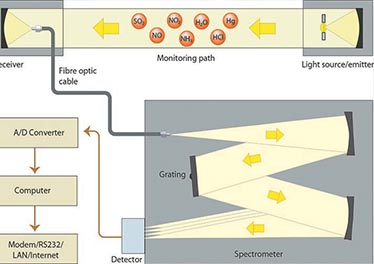